The equipment: 1930 Leica Model I which was upgraded in 1935 to a Model III with a rangefinder focusing system; 1935 Leitz 5cm f2 Summar lens;  Kodak Tri-X 400 ISO black and white 35mm film push processed by hand to EL 1600;  iPhone 8 for with Pocket Meter app for metering

If you’re not familiar with my work, I shoot weddings and events on b&w 35mm film.  Most of the cameras/lenses I use are Nikons and Leica’s from the 70’s to 90’s.  Since the early Leica’s are the origin of the concept and control layout of the much newer/evolved cameras I typically use, it seemed like a fair challenge to use one as the primary camera at a sports event.

I wanted to see what it would be like shooting a fast paced event with something very old, but theoretically, very capable.  You could also say I want to prove something.  Exactly what, I do not know!

What’s special about early Leica cameras that they set precedent and standards for design that enabled photographers to shoot more truthful, documentary action photography as opposed to the meticulously arranged studio photography that dominated the artform in the early 20th century.

By building a diminutive body and placing controls in locations where the hands and fingers naturally fall across the camera, the first Leica cameras revolutionized how photographers approached their subject matter.  Despite what may feel like a slow, complicated camera now, in 1930, the Leica was excitingly innovative and faster than many other cameras of the day.  And they were compact enough to carry daily without fuss.  Honestly, at the core of it, there’s not much different about my 1930 Leica from a 2020 Leica M-A.

The only real “gotcha” is that shooting on an antique Leica requires that the shooter have plenty of down time or a second body to take over after each 36 exposures.  The reason being that it can take a considerable amount of time to load and unload an old Leica.  Even for an experienced user.  But a gymnastics competition is a perfect example of when 36 shots at a time is plenty.  On a team, you might have up to 10 or 12 gymnasts so you can certainly get by with taking two or three shots each and then reloading between events.  Rapid firing is not impossible but there is something very Zen-like about the way one has to concentrate because there are so few chances to get the scenes and moments one wants.

While shooting , I found that the 1930 Leica largely functions as quickly and enjoyably as a modern, albeit, fully manual camera, and with about the same degree of control over the image.  Aperture and focus controls on the lens, adjusted by the left hand; shutter speed dial, shutter release and film advance on top of the body, controlled by the right hand.  And while one must advance the film with a knob wind, unlike most contemporaries, the Leica advance stops precisely on each frame, making it not much slower than the common single stroke advance lever.

This method even has some advantages as it narrows ones concentration to the elusive, proverbial, legendary “decisive moment.”  The viewfinder on my 1930 Leica does not contain any focusing or metering display, it’s simply a bright, clear window.  It is a bit small though, so I chose to use an accessory brightline finder for this event.  Which is equally unfettered by distractions but is considerably larger.  And unlike an SLR, I can see my subject at the precise moment of exposure so I am 100% certain that I clicked on the moment I wanted to capture.  Everything else was set beforehand, it’s only a matter of watching and waiting. 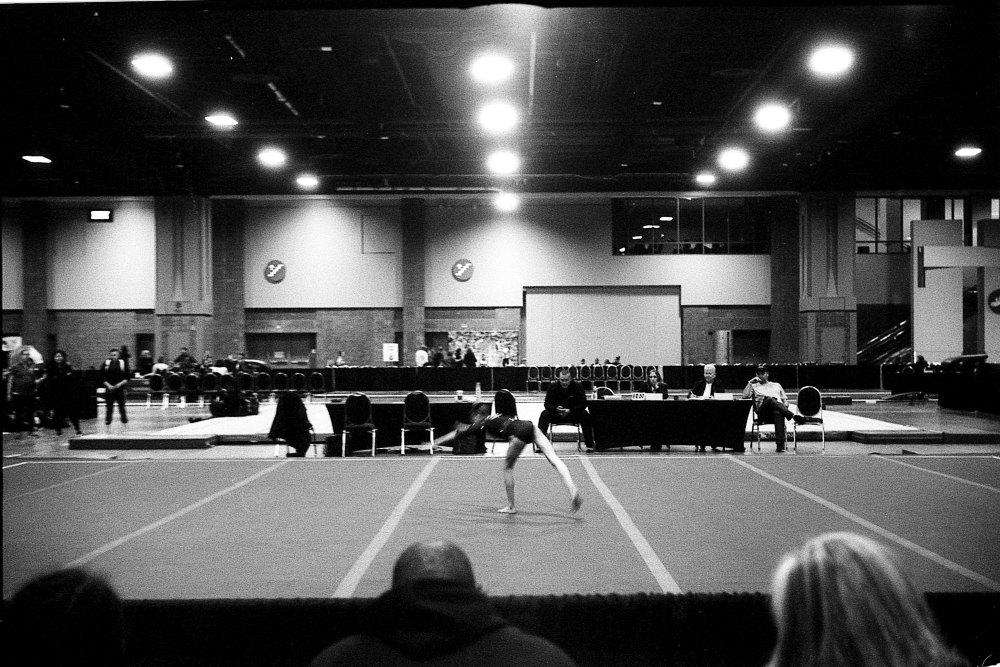 No metering display.  You might have caught that.  Since the Leica has no built-in meter and I chose not to use my accessory Voigtlander VC II for this event, I used my iPhone.  Purists may consider this “cheating,” but my goal is to take a good photo, and I left my 1930’s extinction meter in the horse and buggy!  So yes, I used the Pocket Meter iPhone app and am cool with that.  Lighting was simple and unchanging which really didn’t need to be measured from shot to shot, only from scene to scene.  Frankly, exposure could really have just been guessed but why not get things right?  By the way, I was at 1600 ISO at 1/60th of a second at f4.

I chose these settings to enable me to stop down on the old 50mm f2 lens.  I considered using my Leitz 90mm f4 Elmar but I would have had to increase the shutter speed as well as would have to push to 3200.  Pushing another stop would have been fine, but I wanted a wider perspective and the blurred motion of the gymnasts’ actions because, frankly, you just don’t see good motion blur in sports photography.  And also because I wanted to obscure faces so these images can be seen on a universal level.  Black and white high contrast is great for emphasizing shape and line; what ultimately, the various gymnastics motions are all about.

So is a 1930 Leica and competent photographer capable of the same type and quality of sports action shots that we associate with today?  Probably not.  Why?  Because while yes, it’s all about the photographer, the camera (or gear as a whole) does play a significant role in the quality of ones images.  In fact, WHAT one shoots on often determines HOW one chooses to shoot.  And while I admire the tech and skills required by and displayed in modern sports photography, I think it’s pretty damn cool that in 2020 you cover an athletic event with a 90 year old camera in a style that has been largely been forgotten yet never went away!

What do you think?  Maybe I could just load the 1930 with some color Portra film and screw in a modern Voigtländer and keep up with the DSLR guys and their massive telephotos?  Maybe you’d recommend a different, more capable camera of similar age?  Let me know your thoughts!

Thanks for reading, happy shooting!

8 thoughts on “Shooting Sports with a 90 Year Old Camera”

Johnny Martyr is a contemporary film photographer whose concentration is in Available Light 35mm Photojournalism in Frederick, Maryland. Martyr's lifestyle portraits & documentary art can be found in the pages of Huffington Post, Marie Claire, Modern Wedding, Petapixel, BuzzFeed & others. Check out www.JohnnyMartyr.com or reach out to JohnnyMartyr@Hotmail.com.
%d bloggers like this: