It’s totally unnecessary to write yet another article extolling the historical relevance of the early Barnack Leica cameras to photography.  After a century of influence, everyone knows the story of how Oskar Barnack, Ernst Leitz and Max Beret revolutionized photography with their tiny, intuitive 35mm cameras and lenses during the 1920’s and ’30’s.

Perhaps a lesser told tale is that of the numerous, more affordable copies of the expensive early Leica cameras that were not only built by other manufacturers but, in fact, simply built manufacturers!  Canon is one of, if not the top-selling camera manufacturers in the world today and yet they owe their existence, en total, to copying Leica.  The same could be said for Zorki and various other lesser-known or now-defunct camera-makers who attempted to stand on the shoulders of giants and leap to their own success.

Probably since the copying began, there’s been a rivalry between the original and the copies.  Goro Yoshida, founder of Canon Cameras is famously quoted:

“I just disassembled the camera [Leica] without any specific plan, but simply to take a look at each part. I found there were no special items like diamonds inside the camera. The parts were made from brass, aluminum, iron and rubber. I was surprised that when these inexpensive materials were put together into a camera, it demanded an exorbitant price. This made me angry.”

And that anger often rages today, between Leica adherents and LTM shooters who swear that Leica’s are not worth the cost.

Knowing how avid a fan of knob-wind Leica rangefinders that I am, fellow blogger/photographer Mike Echman reached out to me with a friendly recommendation.  Perhaps a challenge.

See, Mike heard that I have never handled what I would consider a GOOD Leica copy.  So he wanted to provide examples that might shake up my love for Leitz!  Mike kindly offered to send me his three top, personal favorite Leica copies to see what I thought. And I happily obliged.

The day came when his package arrived.  Excitedly, I began placing all of Mike’s little cameras, as well as mine, on my dining room table for comparison.  My wife walked in on the scene, stopped dead in her tracks and very diplomatically asked “why are there like 50 Leica’s on the table?”  Her sigh of relief was audible when I explained that I had not purchased them and that they were not real Leica’s.

Unlike many it seems, my wife is unusually and very thankfully supportive of my camera collecting but in this instance, I do think that divorce may have crossed her mind! 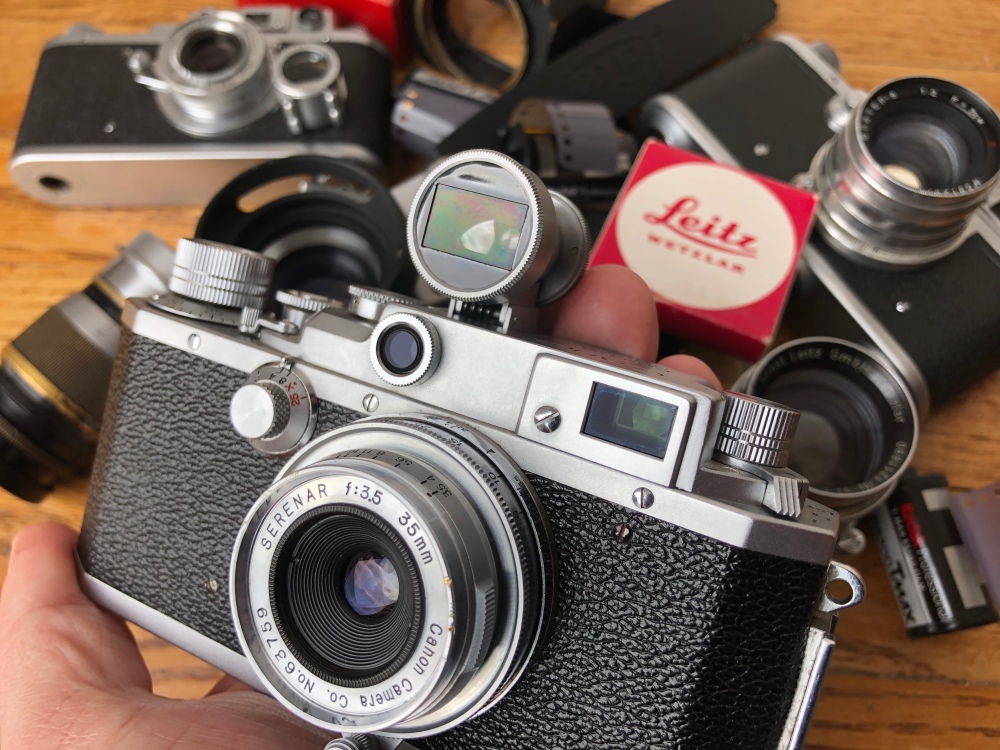 The first thing on everyone’s mind is, is a Leica copy as good as the real thing?

Well, admittedly, Mike’s kind loan shook my faith a little.  While there are some instances in which, even a ham-handed newb photog should find construction quality and usability of the copy far inferior to the original, I must confess that in other instances, the choice between Leica and a copy probably only comes down to personal preference.

It was clear very quickly that Leica’s sterling reputation for umatched quality was a bit of a myth, because here were several good contenders who’d largely done just that, matched Leica.  And one, perhaps two examples where the kids one-up’d the fathers of 35mm with advanced features.

Because I already own two authentic knob-wind Leica’s that I am very happy with and have been at my side for numerous important occasions, I don’t have any need or desire to replace them with the copies that Mike introduced me to, or others.  But this experience has certainly helped me see why some shooters prefer cheaper, arguably less historically relevant, well-featured Leica copies to the originals.

Stay tuned to see my thoughts on each of Mike’s Leica contenders.  I’ll be reviewing the Zorki-1, Zorki-3 and Canon IVSB.  I also went on a little tangent with the Voigtlander Bessa R2.