Back in art school, between my classes, I’d follow friends into their classes and hang out for a bit.  One fateful day (these stories always contain a fateful day) I followed Becca into her drawing class.  Becca was a quiet but opinionated graphic designer I had a crush on.  She seemed to take pride in declining my numerous date requests but she tolerated my following her around and asking anyway.  As she placed her giant pad of fiber paper upon an easel and laid out supplies on one of those well-worn art school tables that resembled a violently abused cutting board, we chatted and I weaved around the room as she spoke.

Art class rooms were always the best to wander through.  Sometimes I would duck into them if the door had been left open and nobody was there, to just explore the space like a gallery, quietly contemplating uninterrupted, the many fascinating objects and scenes.  Even if they weren’t fascinating, the articulation of why they weren’t fascinating, in my mind was itself, fascinating.  Unfinished paintings, imperfect sculptures, balled up failed attempts clustered in unified anger around paint-splattered trashcans.  Evidence of head explosions and obliterated hearts.

Well anyway, as I talked with Becca and milled about, I came across a cluttered cork board absolutely covered, like pushing beyond its frame so that one could only assume there was a cork board behind everything, all pinned up with postcards and paraphernalia.  Becca said that whenever people went to exhibits that they liked, or really didn’t like, they pinned up the postcard for it there and sometimes when there was time, the class shared them and discussed and that was how they found out what was going on.

She kept talking the way people keep blabbing in movies and their volume slowly fades out as the camera dollies in closer and closer to the thing you’re supposed to be realising is so incredibly important to the plot.  That thing that I was dollied in on, by the way, good movies don’t zoom, they dolly, but anyway the that thing I was dollied in on was this large, aged, tattered, b&w postcard, a tight close-up black and white photograph of the chest of a t-shirted man smoking a cigarette in high contrast, probably with a harsh flash, and on his shirt in small plain print were some of the most bizarre lunatic genius statements I had ever read which seemed to, at first blush, comprise some sort of yammering disjointed stream of conscious sociopolitical manifesto that didn’t ultimately make any sense and yet made all the sense and was very touching very moving, sucking me in tighter and tighter until that movie camera dollied in so far that the lens of the camera hit the postcard and Becca’s voice abruptly returned and reality rushed back at me like a tidal wave from out of the blissful nowhere to which I was only moments ago drifting into.  Period. 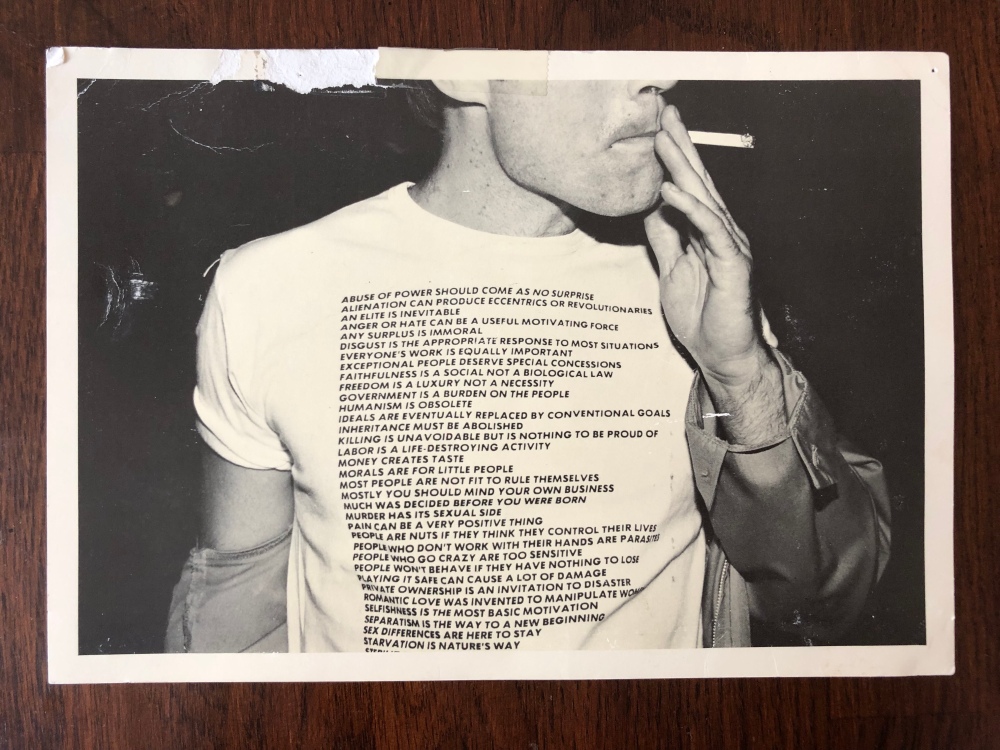 I returned a glance at Becca and couldn’t hear what she was saying.  I couldn’t hear anything anymore.  Because everything sounded different.  Looked different.  Felt different.  As naturally as anything I’ve ever done, unflinching, I pulled the pushpin right out of that postcard and walked out of the room with it (the postcard, not the pushpin) as if the image and I belonged to one another.

I walked outside and sat in the quad in the cold winter air that burned my face and I forgot where my jacket was and I just read and re-read this guy’s t-shirt over and over again as time stood still, frustrated as hell that the text was cut off on the bottom.  I had to find out more.  I was desperate.  I was hungry.  I was burning.  I turned the postcard over.

It was the early 2000’s and the instant reflex was not to locate a computer and find out more, however that is what I tried to do some time later.  I had difficulty finding much useful information at the time.  Maybe because reverse image search wasn’t a thing yet and it’s not like a had a cell phone camera.  Or maybe because I enjoyed leaving the postcard as some sort of personal unreachable inexplicable mystery.

I never did return that postcard to the cork board.  If it is your post card and you would like it back, I’m not sure that I’m willing to give it back.  I have kept this Jenny Holzer postcard tucked away in the personal journal that I used to keep for many years through many life-altering events and I was thinking of it today and found this blurb in the New York Times list of 25 Works of Art That Define the Contemporary Age:

Jenny Holzer (b. Gallipolis, Ohio, 1950) was 25 years old when she began compiling her “Truisms,” more than 250 cryptic maxims, terse commands and shrewd observations. Culled from world literature and philosophy, some of the one-liners are judgmental (“Any surplus is immoral”), others bleak (“Ideals are replaced by conventional goals at a certain age”), and a few echo the half-baked platitudes found in fortune cookies (“You must have one grand passion”). The most resonant are the political ones, none more so than “Abuse of power comes as no surprise.” After printing them as posters, which she pasted among real advertisements throughout downtown Manhattan, Holzer reproduced them on objects, including baseball caps, T-shirts and condoms. She projected them on the enormous Spectacolor LED board in Times Square in 1982, with smaller scrolling signs to evoke the digital clocks and screens through which we are continuously fed information (and told what to think) in urban environments. Holzer continues to use the “Truisms” today, incorporating them into electronic signs, benches, footstools and T-shirts.

But you know what?  I still cannot find this particular photograph, taken by Lisa Kahane anywhere online.  And if I’m honest, this photograph of this art object is just as compelling to me as a vehicle for Truisms as the words themselves.  Before I flipped that postcard over, I imagined that I knew the man in the t-shirt and that the man was me.  Or at least, a very specific version of me who had just left a bar, turned down a pretty girl’s advances and now was off to do something else very very casual and very very masculine.  Who is he really?  What is HIS story?  What’s the story of this beautiful beautiful photograph, that I think, does so much to encapsulate and express Jenny Holzer’s vision while simultaneously having a life of its own and yet seems to have largely been forgotten.

Lisa Kahane took a number of promotional images for Holzer during her Truisms projects in the early 80’s.  Her more famous shots contain the Spectracolor sign work in Timesquare.  More recently Kahane’s wider, color shot of Lady Pink holding a lit cigarette and wearing Holzer’s Truism shirt in Timesquare seems to have directly replaced the b&w close-up of the man.  How does the delivery of the message by a man or a woman affect the message?

And who is that man anyway?

Is the man John Ahearn, a sculptor in the Bronx?  Kahane seems to have worked with him in the ’80’s.  Or how about Stefan Eins.  He looks good modeling white tee-shirts for Kahane.  Yes, please follow the backlinks for context.

Is Becca still wondering where I went?  Why hasn’t Lisa Kahane returned my messages?  What does it all mean?  Damn if I know.

But I managed to get my own copy of The Shirt so that I can take embarrassing self-portraits and confuse and confound those who are so bored/fascinated around me that they read the Truisms.  But most importantly, I found out what the rest of the shirt says! 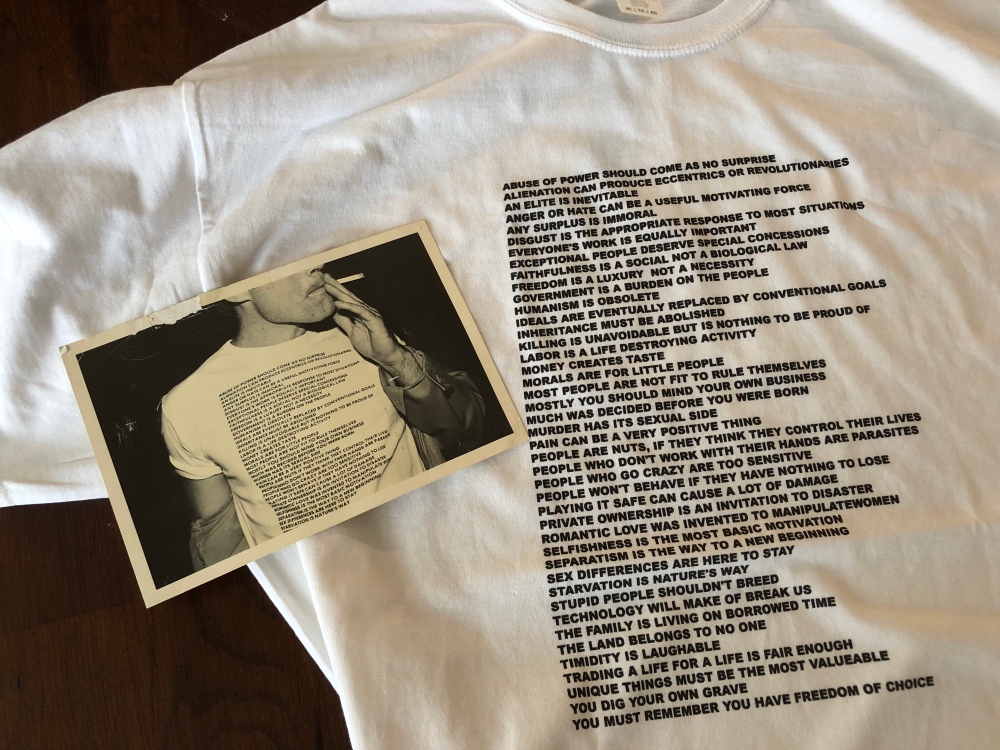 Thanks for reading, happy shooting!

Johnny Martyr is a contemporary film photographer whose concentration is in Available Light 35mm Photojournalism in Frederick, Maryland. Martyr's lifestyle portraits & documentary art can be found in the pages of Huffington Post, Marie Claire, Modern Wedding, Petapixel, BuzzFeed & others. Check out www.JohnnyMartyr.com or reach out to JohnnyMartyr@Hotmail.com.
Loading Comments...
Comment
×
%d bloggers like this: