Fact.  I have owned a copy of every SMC-M 50mm lens that Pentax ever made.

The SMC-M 50/2 is an excellent performer and is valued in about the same range as a body cap!  Great student shooter lens or for a daytime/flash shooter who prefers to spend their $$ on film than needless equipment.

The 50/1.7, in my opinion, is the smartest Pentax SMC-M lens to own if you’re only going to own one 50 for your kit.  It’s very cheap, often overlooked, but very small and light, yet performs more strongly than the 50/1.4 at wide apertures.  I’ve shot extensively with it also.  Without getting too far off track, here’s a link of examples.

I’ve owned a couple 50/1.4’s because I just didn’t believe a Pentax prime could be so disappointing wide open that I bought another and even had one CLA’d just to be sure I wasn’t buying out of wack lenses.  These lenses are big, heavy and offer nothing that the 50/1.7 doesn’t offer unless you prefer soft focus images at wider apertures. 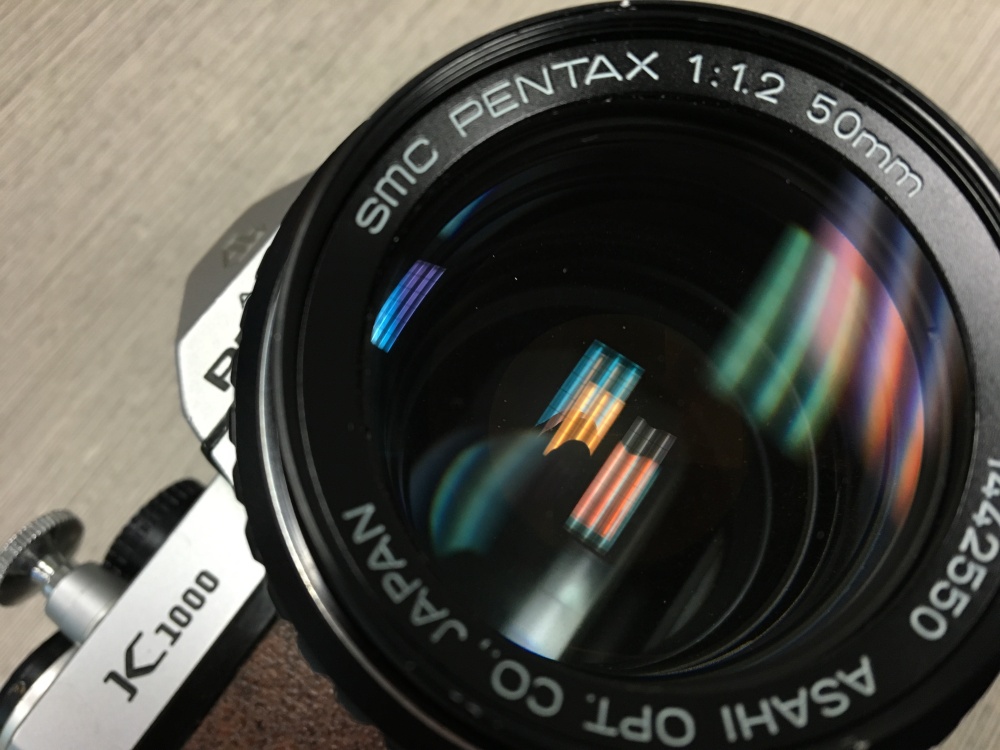 Yes, the SMC 50mm 1.2 is a big, heavy lens, easily moreso than any of the other SMC-M 50’s, but, it’s smaller and lighter than any other Japanese 50/1.2.  In fact, it fits so well on a K1000 that it just looks like a normal lens.  On an LX, it is probably best at home.  The wide focus ring rests well in ones hand and is not so damped as to tire the fingers such as longer lenses tend to be.  Click stops are as smooth and definitive as any other SMC-M lens.  It contains a dense 7 elements in 6 groups and 8 rounded aperture blades.

What’s great about the SMC 50/1.2 is that it does what you expect the most expensive lens of a line-up to do; blow the rest out of the water!  When you buy a Nikon or even a Leica super fast lens, some models, arguably, don’t even live up to the performance of their humble 50/2 offerings.  That is not a concern with the Pentax.  At every aperture, at every distance, it is sharper, has more micro-contrast, less ghosting, less distortion and creamier, dreamier bokeh than any other SMC-M 50.

Unlike earlier super fast lenses, and some made by lesser manufacturers, out of focus areas are even, without swirl or funky shapes or soap-bubbling to light sources.  Bokeh is almost German smooth.  Certainly smooth enough, in combination with the high resolution of sharp areas, to create really crisp, nearly 3D, separation.

Focusing.  Get as close as 1.5 feet, .2 feet closer than Nikon’s bigger, more expensive 50/1.2 AIS.  The closer the focus, the more shallow DoF!  Getting close and shooting at full aperture with this lens gives results that feel more like those of a macro lens than a standard.

So if you ruled out picking up this lens on the basis that you don’t NEED 1.2, what may interest you is it’s absolutely stunning stopped down performance.  At f4 to 5.6, this lens just sings.

The following shots were opened up a bit more.

The moment you’ve all been waiting for…

I present to you…

The Pentax SMC 50mm 1.2 at FULL APERTURE, and in some cases, minimal focusing distance too!

When shooting wide open at closer distances, it can be tricky to hit focus so some may want to stick to shooting non-moving objects.  However, the lens has a nice way of drawing that can be engaging for portraits even if the focus isn’t perfectly dead on.

So don’t talk yourself out of this 1.2 with the usual excuses of hard to focus, too expensive, too big or unnecessary because this is the cheapest, most available, smallest one you’re going to find.  It outperforms all other Pentax 50’s and probably a number other manufacturers’ 50’s also!  And therefore the Pentax SMC 50/1.2 is well worth every penny and every moment spent using it!

Do you have this lens or one like it?  I want to hear what you think!