The Leitz 9cm f4 Elmar is almost as ubiquitous as the famous Leitz 5cm f3.5 Elmar but often seems forgotten about. 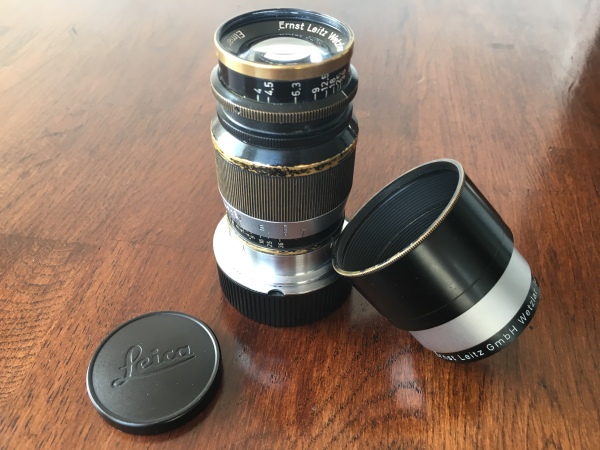 The lens dates back to 1933 and was Leica’s first 90mm.  It was likely designed to take advantage of their newly released rangefinder cameras, model’s II and III.  The 9cm Elmar is part of the the first wave of Leica’s new 35mm camera system, which, only three years prior, received its first interchangeable lens mount.  This was a time of critical innovation that begot near-modern expectations of portable cameras.

My copy of the 9cm Elmar is black and brassed with chrome trim from 1946.  This is the first year that Leica applied UV coating to the front element.  Beyond the addition of increasingly higher performing coatings and changes in barrel design, the simple four element in three group design endured until 1964, well into the Leica M mount days.  There was even a collapsible version of the 90 Elmar!

Probably like many 21st century shooters, I primarily bought the 90 Elmar because it cost such a negligible amount.  Typically, a mere $100-$300 depending on the model, will yield a good copy.  Quite a bargain for the Leitz name, AND for spectacular portraits!

While some will find that the slow f4 maximum aperture and rotating front rings will keep them from putting their cheap vintage Leitz to much use, others will appreciate it’s pocketable nature and surprising performance for daylight photography.

Sometime in the 1950’s, the 90 Elmar received modern aperture values engraved on the aperture ring.  So if the f4, 4.5, 6.3, 9, 12.5, 18, 25, 36 scale bugs you, simply seek a newer copy.  And as noted, when rotating the focus ring on the older, cheaper copies, the entire front assembly also rotates.  It may be best to set aperture first, then focus so as not to chase the aperture around the barrel.  Kudos to Leica though for imprinting the aperture scale on the “top” and “bottom” of the ring so that if you rotate the assembly a full turn, you don’t have to look on the “bottom” of the lens to find your f-stop.  When I was in my 20’s and new to using gear this old, these things seemed wonky to me.

With a little more age and understanding of the development of 35mm photography under my belt, as well as matured handling of cameras and lenses, these small nuisances really don’t trouble me much.  In fact, I rather enjoy the quirkiness!

Your patience with ergonomics will be rewarded with the 90 Elmar.  It takes a FANTASTIC photograph!  Unlike earlier, uncoated Leitz lenses, my experience is that I get very little of the veiling flare and contrast loss that haunts LTM lenses.  Like many short telephotos, at full aperture, it pays to be careful with bright light entering the front element at an angle but I really don’t use the correct FIKIS hood very much because the single coating seems to hold its own very nicely.

The 90 Elmar is well adept at portrait photography because, even at it’s sharpest performance in middle apertures, it exhibits a pinch of well-intended glow and roll-off that smooths the skin and softens shadows.  Meanwhile, out of focus backgrounds, perhaps surprisingly with an f4 lens, melt away gently with a reasonably smooth bokeh that lacks noteworthy fringing or chromatic aberration with color film.  We can probably credit the simple formula and the Elmar’s luxurious fifteen blade diaphragm for this lovely rendering.

In use, the 90 Elmar is a good lens to have around because it’s not very demanding.  It can easily be a “just in case” type lens.

Not only is it cheap but it’s small enough to disappear in a clenched fist.  It takes up negligible space in the bag.  Additionally, as noted, you can usually squeak by without a hood.  (though I would recommend one for extended use.)  And whatever accessories you use with the 90 Elmar, such as the front cap, filters or even FIKUS hood, are a common 36mm diameter so they’ll probably fit your 50mm or 35mm too.

If using the 9cm Elmar as intended, on a Barnack Leica, you’ll want to slip a viewfinder into your accessory shoe.  Brightline viewfinders by Leica or Voigtlander are my preference but they can be costly.  SGVOO is the five letter word for Leica’s 9cm brightline finder.  There are some cheaper 90mm wireframe finders like ROSOL and RASAL.  And there are some more costly folding optical finders like SEROO and SOOUT.  Then there are the multi-length optical finders, IMARECT VIOOH and VIDOM.  If your budget is tight, there are plenty of 3rd party finders or guess framing using the 1.5x RF patch as a guide.

Of course, you will need an LTM to M adapter if running an older copy of the 9cm Elmar with a Leica M, but it doesn’t cost much more to bump up to an M mount version with normal aperture and distance markings.  And because this is only an f4 lens, it should be accurate to focus even on a Leica CL or Voigtlander Bessa but works precisely on any Leica M or Barnack rangefinder, pretty much regardless of it’s EBL.

There really isn’t any reason at all not to buy a 90 Elmar in a barrel style of your choosing.  Even if you don’t often step into the world of rangefinder telephotos, you might just find the 90 Elmar will pull you in!

UPDATE: For the Fourth of July festivities, I used the 9cm Elmar to capture fireworks, the results were awesome!